In Defence of Carrie and David Grant’s ‘Pop Shop’… 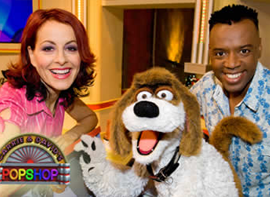 I love music. All sorts. My roots are fairly rock based but I love good music from all genres.  It has featured heavily in my life and my appreciation started at a very young age.  I have been fortunate enough to forge a career which currently sees me working as a music specialist in a large primary school in Surrey as well as writing music for young people with my wife.  As ‘My first rock band’ we create music which is suitable for young people to listen to but hopefully their parents will enjoy as well.


Recently I discovered ‘Carrie and David’s Pop Shop’.  For those who haven’t seen it, the show centres around a shop where customers come in and ask Carrie and David to compose them a song on a subject that they choose.  The rest is down to them, the lyrics, style and instrumentation.  Add to this some excellent warm ups that kids really get into, and you have a fantastic musical experience for young people.  They are obviously hugely talented musicians and performers themselves and the programme is a breath of fresh air.  So after watching an episode which featured a particularly catchy song about a grumpy dad, I decided to look them up on Twitter.

When I typed in the name of the programme, I was faced with a number of tweets berating them and their ‘Pop Shop’ and I just don’t get where they’re coming from.  There were dozens of parents complaining that their kids were watching and enjoying the show.  There were people WHO DIDN’T HAVE CHILDREN saying things like ‘as if kids enjoy this’.  I’d question why they were watching CBeebies in the first place.  I could go on but I would like to give a few reasons why I think Carrie and David are brilliant at what they do.


Children need access to good music that is age appropriate.  Pop music is great but lyrically the majority of artists don’t write for the age group that are actually buying their records. Carrie and David provide this in every episode.


It’s important that children know that more goes into music then just rolling up to an audition and singing other people’s songs.  Carrie and David break down the writing process really well and give you an idea of what is needed to create a song.

When you sing, you need to warm up properly.  They make this process fun and interesting.


It’s important that young people know that there are lots of different musical styles for them to listen to. Once again, Carrie and David have got this covered.


It’s always nice to know the instruments that you’re listening to, just in case you want to start playing that instrument yourself.  No surprises, this is also dealt with.


As a musician, maybe I’m biased but Carrie and David should be celebrated for ‘Pop Shop’.  There have been other music programmes for children that don’t capture their imaginations in the same way.  I understand that every presenter isn’t going to be everyone’s cup of tea but you know what, it’s not about you, it’s about your children. If they are enjoying ‘Carrie and David’s Pop Shop’, they are actually enjoying one of the most constructive children’s programmes currently doing the rounds.  Music for young people is crucial. It allows them to use their imaginations, it can comfort them, it can help them concentrate and it can make them smarter, although I may be an exception to that particular rule.


So what say we stop moaning about Carrie and David. They are positive role models, great at what they do and perhaps you should focus on what your children are getting out of the experience, it might just be enough to get you through it.


Angela and Andrew Scullin started Lucky Bucket Productions when they realised there is a shortage of good material for young performers, now they provide schools and theatre groups across the country with original shows for performance.

Under the Sea Snap Cards