Home > Blog Contributers > Angela and Andrew Scullin > To NATIVITY or not to NATIVITY?

To NATIVITY or not to NATIVITY? 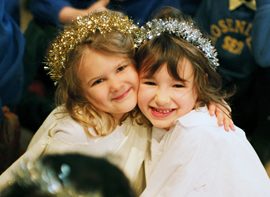 For once; I don’t have a strong opinion.  I am a little torn.  So, school nativities -what do we think about them really, really?

We have Christmas scripts for schools on our catalogue and one is called Carry On:  A Nativity but it is a spin on the traditional telling of the story.  It is a play within a play.  A teacher leads the rehearsal for the nativity play with all of the usual issues that arise.  So the story is told but in the familiar setting of school.

I was tempted this year to pen a straight, traditional nativity script – I thought again.  It’s not really ‘us’ and it’s not really necessary – there are plenty of them around but ours is a nativity with a difference.    We were asked by a teacher friend for a Christmas script that could be performed in a church  – we don’t have one.  Is it bad that we don’t have a Christmas script suitable for a Church performance?

Anyway, my question is:  Should we see the end of the traditional nativity in primary schools?

Are we indoctrinating future generations by making them dress up as sheep, wrap tinsel round their heads and act out a nativity?  I did it.  I was an Angel on many occasions and I don’t think it has influenced me one way or another.  I like the idea of children knowing the many options available to them, making informed decisions about their faith and spirituality.  I just don’t know how offensive a school play can really be?

I have actually come to really value the school nativity AND the carol service in the church and anything else that makes me nostalgic and emotional.  I love hearing children singing in groups and these are great opportunities for this to happen.  For me, it marks the beginning of Christmas and I love it.

Is it really unwise for schools to choose a traditional nativity?  Are they alienating pupils and parents?  That is obviously something to be avoided.  Perhaps it is better to choose a Christmas themed play?  Answers on a Christmassy postcard please.

Ultimately, you can’t please all of the people all of the time, I suppose.  I’m just glad I am not the decision maker in a school!

Angela and Andrew Scullin started Lucky Bucket Productions when they realised there is a shortage of good material for young performers, now they provide schools and theatre groups across the country with original shows for performance.