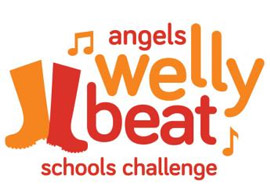 International Children’s Charity, Angels, has teamed up with children’s TV presenter Andy Day to launch the ‘Angels Welly Beat Schools Challenge’. The aim of the campaign is to raise money to return 1,000 South African children to school.

Angels was established in 2006 with the aim of enfranchising the world’s poorest children through the power of music. Its fundraising efforts have led to the creation of a ‘Pop Up’ school within an informal settlement in South Africa where the children, all of whom are vulnerable, spend the majority of their time on the streets.

They have created a three step programme to return the children to mainstream school. First the children are fed and then they are taught according to a musical phonics based programme to re-engage them with learning. The third and final step is the provision of ‘Angels bags’ incorporating tiered educational resources, clothing and toiletries; essential kit for a return to school.

What is the challenge?

The challenge involves a journey into musical creativity. Along with Andy TV music producers Rob and Dan, from Bunkersonix, have written the ‘Angels Welly Beat’, a song based on the old South African gumboot tradition which was historically used in the mines as a form of communication during Apartheid. Schools and nurseries will be challenged to perform the chorus in their welly boots and in the most inspiring way possible, using their bodies, musical instruments or even recycled materials.  Andy will pick the most creative video posted to a secure section of the Angels website and that school or nursery will win the opportunity to feature in the music video of the song which will go on general release. The school or nursery that raises the most money will receive a visit from Andy.

In addition to these 2 amazing prizes the Challenge is a wonderful opportunity to deliver EYFS and national curriculum goals in a unique and engaging way. The campaign delivers against all the key foundation subjects from Maths, English and Science to Art, DT, Geography and History. To help you get the most out of the Challenge a comprehensive teacher’s pack will be sent to all participating schools and nurseries. This will include:

– A video of Andy demonstrating the Welly Beat chorus with the street children as well as an introduction to the settlement and a tour of a child’s home.

– Fundraising ideas around the themes of music and storytelling aimed at encouraging shared experiences with the children in South Africa and helping you meet EYFS and National Curriculum goals in a truly inspirational way.

In South Africa grandmothers are often primary carers to vulnerable children, here in the UK grandparents are increasingly involved in their grandchildren’s lives as support carers. You could celebrate this by organising:

Angels currently runs a recycling programme in the settlement and children must swap a piece of rubbish for an ‘Angels Bag’ in order to avoid a hand out mentality. Recycling is also an increasingly important message for our children and schools. You could reflect this by organising

– Instrument auction – children make a musical instrument, demonstrate it and auction it off to the highest bidder

The Welly Beat Challenge is open to all UK pre and primary aged school children (including day nurseries and after school clubs).

It will run through the Summer school term (approx. 20th April – 22nd July) to allow flexible incorporation; the whole school or nursery can participate or just a single class or year group.   Fundraising ideas are just a guide, you will be free to use your own tried and tested formats or devise new ones to specifically suit your lesson plan.